CLICK HERE for further information about our safety protocols. 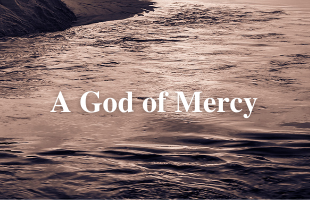 From Genesis to Revelation, the Bible is an inerrant record of the self-disclosure of the Triune God. The inspired words of the divine deposit reveal to us what God is like and how He interacts with His creatures. In the biblical record of redemptive history, we observe our God’s sovereignty, providence, righteousness, grace, love, promises, omnipotence, omnipresence, wisdom, judgments, and forgiveness.

To put it succinctly, Scripture is about God. He is the hero of the Bible’s story line, and, in fact, He is its author. The reverent reader is awed by what He reveals about Himself on Scripture’s pages.

One of the attributes of God, what He is like, is unmentioned in the litany above. That attribute is mercy.

This attribute is relevant to us because we live in a world where the problems of sin bring difficult conditions for us. However, our God is the answer for these circumstances. Paul writes in 2 Corinthians 1:3 that God is the Father of mercies.

Like men who beget children, God the Father begets mercies. Without His exercise of this attribute, no mercy would ever be born into the world. Such mercy was displayed in the life of Epaphroditus, a man whom Paul called “My brother, and fellow worker and fellow soldier” (Philippians 2:25). This valued Christian brother and worker came to the threshold of death in his service to the apostle Paul. Epaphroditus risked his life, Paul recounts in Philippians 2:27, 30.

This noble fellow worker of Paul’s was willing to lay down his life in sacrificial service to Paul in the cause of Christ (1 John 3:16; Philippians 2:30). The interposition of divine mercy preserved Epaphroditus’s life (v. 27).

It is the Lord who preserves and delivers from death. Psalm 68:20 asserts, “and to God belong escapes from death.” “God in His mercy sets His power on work to help us,”[ii] said Thomas Watson.

Divine mercy had a ripple effect, like a stone creates when it is thrown across a pond. Paul was a recipient of the blessing of mercy extended Epaphroditus. Paul would have experienced compounded sorrow if Epaphroditus had expired (v. 27).

The effect of God’s mercy to Epaphroditus did not stop with the apostle, it reached the Philippian church. Epaphroditus was able to return to them and, presumably, continue his ministry among them.

Contemplate for a moment how many instances you know of or have experienced when God set His power to work in mercy to deliver you from a “pitiable or miserable condition”. I have contemplated one episode of His mercy in the life of my family many times.

My sister, during our childhood in the 1960s, became seriously ill. It was during the Christmas season. Surgery was performed on her, but after the procedure, a bodily function needed to happen for her to recover and return to full health. The surgeon intimated that it was out of his hands. Indeed, it was in the hands of God! I prayed (as did others). I prayed repeatedly in this time subsequent to the conclusion of the operation. The words of my youthful intercession are unremembered and, no doubt, unremarkable. But the God of heaven heard me with merciful ears and set His power to work on behalf of my sister. His mercy was not only granted to me, but to our parents, our grandmother, and other extended family members.

What about those instances when God chooses not to intervene with temporal mercy and health fails and death ensues? For the believer, there is a greater aspect of God’s mercy. We’ve experienced it in our salvation (Ephesians 2:4).

His mercy to us in this regard is made explicit in Titus 3:5. “He saved us, not on the basis of deeds which we have done in righteousness, but according to His mercy, by the washing of regeneration and renewing by the Holy Spirit.”

Because of His saving mercy to us through our faith in the Lord Jesus Christ, we exit this world at death and enter into the immediate presence of our Savior.

What Was God Doing?

Race: A Biblical and Theological Perspective
//