We will be limited to 50% capacity and everyone will be required to sign up and reserve their seat. 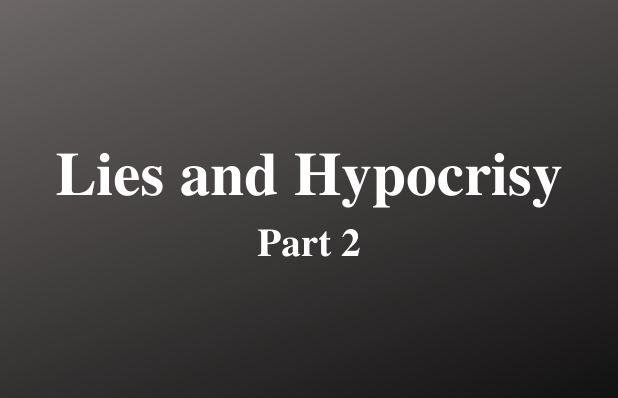 In Part 1 of this blog, we focused attention on the fundamental realities that:  (1) as humans, we come out of the womb liars in a lying world; (2) lying takes many forms, and is destructive and hurtful (3) God does not lie, cannot lie, hates, forbids, and judges lying severely; and (4) Christians must put away lying and deceit, practicing honesty and truthfulness, confessing and repenting when at times they fail.  Here, we will briefly examine the form of lying known as “hypocrisy.”

Generally speaking, what is hypocrisy?

“Hypocrisy” connotes deceit and insincerity, literally referring to someone putting on a mask to act out a part – in other words, pretending to be someone they are not, deceiving others about themselves.  Isn’t that interesting?  Some would attempt to distinguish hypocrisy in such a way that implies it has no relation to lying.  Yet, the term “lying” in its most basic sense is described as not telling the truth.  In the biblical sense, lying occurs through falsehoods or deception.  So, hypocrisy then, masking one’s true self to deceive others, is most assuredly a form of lying.

We each know we live in a world of hypocrisy that impacts nearly everything.  But we Christians do not belong to this world and must guard ourselves against actively engaging in or failing to call out hypocrisy (in love) when we see it in our ranks.  Otherwise, our witness for Christ suffers and we must remain humble, lest we fall.

The Bible is replete with examples of, and condemnation for, hypocritical people and behavior, but I’ve found the most jarring and illustrative to be the words of our Lord Jesus Christ in Matthew 23.  There, He takes head on the blatant hypocrisy of the religious leaders of His day in seven “woes” declared against them.  While “woe” in certain contexts may refer to one’s own miserable condition or misfortune (“woe is me”), in the context of Matthew 23, it is an emphatic exclamation of judgment upon the enemies of God.  Time and time again there, Jesus declares, “Woe to you scribes and Pharisees, hypocrites!”  He condemns them for not practicing what they preach, for burdening the people while being unwilling to lift a finger to help, for wearing elaborate garments and sitting in specials seats and engaging in all other manner of behavior to call attention to their perceived level of importance, pridefully elevating themselves above others. He further condemns them for being full of greed and self-indulgence, placing great value on incidental and material matters while neglecting “justice and mercy and faithfulness.”  (Oh, how that preaches at this moment in time!) Jesus illustrates the point with the cleansing of a cup and plate:  What use are they if only cleansed on the outside, but dirty on the inside?  Jesus' condemnation is anything but subtle, describing the leaders as “a brood of vipers,” and asking: “How are you to escape being sentenced to hell?”

In Matthew 7:1-5, we also see that Jesus condemns hypocritical, self-righteous judgment of others, telling us to take the metaphorical log out of our own eye, before telling someone else about the speck in theirs.  While this verse is often used by people to deflect or avoid righteous judgment of their bad behavior, Jesus' point is to condemn as hypocritical the judgments we make about others that derive from our own prideful sensibilities, rather than a godly desire to address sin.  Later in the chapter, He describes the hypocritical false prophets as wolves in sheep’s clothing, making the familiar point that “many will say to me, 'Lord, Lord, did we not prophesy in your name, and cast out demons in your name, and do many mighty works in your name?' And then will I declare to them, 'I never knew you; depart from me, you workers of lawlessness'" (Matthew 7:22, ESV).  In Mark 7, Jesus elaborates on the issue of hypocrisy being a matter disguising the sinful motives of our heart with an external preoccupation of rituals and traditions.  There, again calling the leaders hypocrites, he quotes Isaiah, “'This people honors me with their lips, but their heart is far from me; in vain do they worship me, teaching as doctrines the commandments of men'” (Mark 7:6, see also Matthew 15:7-9, ESV).  In short, giving the appearance of godliness on the outside, they were more devoted to their own man-made legalistic rituals at heart.

The Apostles on Hypocrisy

James, Paul, and Peter offer further instruction on hypocrisy.  James, for instance, warns against the hypocrisy of being merely a hearer of the word, and not a doer of the word, comparing the former to a person who sees himself in mirror and then walks away and forgets what he looks like (James 1:22-25).  James made plain the point that words mean little without action, and genuine Christians, though not saved by works, will be known for their true love of God by their enduring works of faith.

In Galatians, Paul describes a situation in which he confronted Peter for being hypocritical and influencing Barnabas to act similarly.  Peter, having become a Christian, had put down the Jewish legalistic teachings on dietary restrictions and ate freely with Gentiles.  But when some other Jews arrived at Antioch, he separated himself from the Gentiles, pretending to be committed again to the food practices of Judaism.  Scripture says other Jews “acted hypocritically along with him, so that even Barnabas was led astray by their hypocrisy (Galatians 2:11-13).  Paul called him on it, saying:   "If you, though a Jew, live like a Gentile and not like a Jew, how can you force the Gentiles to live like Jews?" (Galatians 2:14, ESV).  In other words, Peter, a Jew, could not embrace Christian liberty and fellowship with the Gentiles, only to then indicate by his later act of separating himself and other Jews from them, that the laws of Judaism were to be observed after all.

Paul also warned Timothy that in later times professing Christians leaders would “depart from the faith by devoting themselves to deceitful spirits and teachings of demons through the insincerity of liars (literally, “hypocritical lie-speakers”) who’s consciences are seared (1 Timothy 4:1, ESV).  These false teachers’ consciences are dulled to the point of uselessness because of their continual hypocrisy.

Ultimately, it would be Peter, initially challenged by Paul regarding his own hypocrisy, who would encourage believers in his first epistle to be holy, putting away “all malice and all deceit and hypocrisy and envy and all slander” (1 Peter 2:1, ESV).

A Challenge to Christians

As Christians, we should be recovering hypocrites, having put off the old self, for the new self, born of Christ.  Hypocrisy unattended by our conscience, however, can grip and harden deceitfulness in us in ways more subtle than a lie and, therefore, it can be more difficult to root out of our lives once it has taken hold.  While an outright lie often arises at a specific point in time as means to evade a particular point of truth we hope to avoid, hypocrisy is often bound up with our sinful prejudices, jealousies, prideful ambition, and secret sins.  We have all known people, for instance, who “let slip” in private their true views about members of another race that they have hidden quite effectively in public.  We have seen the hateful backbiting by someone insanely jealous of another, while pretending to be a great friend.  The world is full of people who will pretend to be anyone or anything they believe will get them the fame or fortune they desire.  And who has not known of an outspoken defender of virtue or sobriety who, behind closed doors, was a regular purveyor of pornography or a heavy drinker.

In fact, many things people stake their public identities on do not at all match their true self.  Today, we see in ever growing ways that groupthink influenced by choices in social media, news sites, music, and movies helps blind people to their hypocrisy.  Let’s face it, when we choose to cloak ourselves in like-minded bubbles that tickle our ears and feed our fears and insecurities, we insulate ourselves from exposure to the hypocrisy those outside of that bubble readily see in us.  Dare we consider the vile hate and outrage of people – many self-proclaimed Christians – over one man kneeling during the National Anthem, and contrast many of those same people’s silence over an officer kneeling on the throat of a man, killing him?  Really?!  A constitutionally protected protest of injustice is vilified, and a killing justified?!  Dare we also consider that a significant group of Americans today have very strong views about immigration to, and immigrants in, the United States – a country founded by immigrants on land not their own and built on the backs slaves?  Is the looting and destruction of businesses wrong, but the looting and displaying the contents of Indigenous people's graves okay?  Is it possible to be “pro-life” in relation of an unborn child and simultaneously support placing born children in cages?  Can you simultaneously tear down the alleged abhorrent behavior of the other guy’s politician, while ignoring, or blindly defending similar conduct from the one you support? Worse yet, do you accuse or ridicule other people for the things you do, projecting on to them condemnation that rightly belongs to you for such behavior?

Thus is the fallen world, but Christians should not be partakers of it.  We should have a burning passion against hypocrisy in ourselves that matches God’s despising of the same.  After all, as we constantly beat our flesh into submission, as Paul would say, we fight against the hypocrisy that resides with the rest of the sin in our fleshly bodies so that our Christian character may flourish in the power of the Holy Spirit.  We must be bold enough as Christians to exhibit our commitment to honesty so as not to be bound by blind allegiances that are of the world's choosing.  When we mimic the world, we damage our testimony for Christ, often aligning ourselves against the very people to whom we should be sharing Him.  We must not be a part of the charade, rather we must press on toward the mark, striving to be who God has called us to be in Him, putting away all hypocrisy.