Christians and The Government 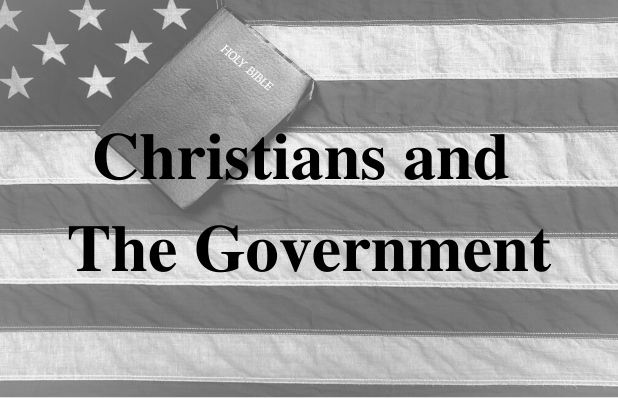 My wife brought a social media post to my attention last week which stated:

“A government that labels Churches as non-essential in reaction to a pandemic and in the same breath labels abortion clinics, liquor stores, and marijuana dispensaries as essential … is no longer the government described in Romans 13.”

From there, stringing various Bible verses together, the author tells his readers that wicked man is at the root of a government that is no longer good and just; therefore, Christians should not “conform to it,” meaning no longer adhere to government rules.  The point of the post, in short, is that good Christians are no longer bound by the command of Scripture to be subject to government – it is an implicit call for Christian rebellion against evil government.  And it could not be more wrong.

The post’s design is classic click-bait:  isolate a group – Christians; identify something they love – church; contrast it with things they typically oppose – immoral behavior; and identify as an enemy someone who appears to be a threat – government.  The goal is to simultaneously entice, anger, and cause you to comment or share the post.  The underlying intent may be to generate advertising income or followers, it may come from a genuine belief or feeling of the author, or it may have a more sinister design to influence conflict.  Most likely, it is a combination of those things.  Unfortunately, Christians all too often take the bait when we should put our feelings in check, in favor of engaging our brains in a critical and biblical analysis.  Let’s consider the biblical perspective on a Christian’s fundamental obligation to government.

Render To Caesar What Is Caesar’s

In Matthew 22:21, when asked whether the people should pay taxes to Rome, Jesus tells the Pharisees to look at the coin with Caesar’s likeness stamped on it and says:  "Therefore render to Caesar the things that are Caesar's, and to God the things that are God's." (Matthew 22:21, ESV).  In other words, respect the authority of the ruler of the kingdom in which you find yourself to raise taxes and, likewise, give honor to God in the things belonging to Him.  Jesus, being God, was obviously well aware when making this statement that all things belong to God and we are just stewards, so the concepts are not in conflict – part of our stewardship is to adhere to our governmental obligations concerning taxes.  And to be clear, the Roman government was corrupt, the tax system was corrupt, the tax collectors were among the most corrupt and most despised.  Days before the Jewish leadership’s plot to kill Jesus would unfold and be fulfilled at the hands of the Roman government who would execute Him, Jesus taught that we have a duty to submit to the authority of secular government.

Obey God Rather Than Men

Contrast Jesus’ instructions regarding submitting to Rome’s taxing authority with the Apostles’ response to the Sanhedrin in Acts 5.  There, the Jewish council had imprisoned Peter and other Apostles for preaching the Gospel, God had divinely intervened, releasing them from prison, whereby they returned to the temple to continue sharing Jesus Christ.  The Apostles were brought before the high priest and Sanhedrin council who reminded them of the order not to preach the Gospel.  But Peter and the apostles answered, "We must obey God rather than men.”  (Acts 5:29, ESV).

Contradiction between Jesus and Peter?

Was Jesus wrong?  Of course not.  Were Peter and the apostles wrong?  No.  So how do we reconcile the two responses?  The distinction is pretty clear:  paying taxes, even to a corrupt government, was not a directive for Christians to reject or denounce Christ; the Sanhedrin order forbidding the Apostles from sharing of the Gospel of Jesus Christ was in direct conflict with the fundamental command and primary mission for the Apostles (and, indeed, all Christians).

Be Subject for the Lord’s Sake to Every Human Institution

Peter, himself, later affirmed the teaching of Jesus regarding our submission to governmental authority as he encouraged Christians in Rome who were under the brutal rule of the Emperor, Nero.  There is some debate about whether Peter’s letter was written shortly before or shortly after Rome burned in a massive fire that killed many, left many homeless, and devastated the city.  Many believed Nero was responsible for the fire and he, in turn, blamed the Christians and initiated a campaign of persecution against them.  In 1 Peter, under the inspiration of the Holy Spirit, either shortly before, or in the midst of, Nero’s campaign of persecution, Peter wrote:

10 Once you were not a people, but now you are God's people; once you had not received mercy, but now you have received mercy.  11 Beloved, I urge you as sojourners and exiles to abstain from the passions of the flesh, which wage war against your soul.  12 Keep your conduct among the Gentiles honorable, so that when they speak against you as evildoers, they may see your good deeds and glorify God on the day of visitation.  13 Be subject for the Lord's sake to every human institution, whether it be to the emperor as supreme, 14 or to governors as sent by him to punish those who do evil and to praise those who do good.  15 For this is the will of God, that by doing good you should put to silence the ignorance of foolish people.  16 Live as people who are free, not using your freedom as a cover-up for evil, but living as servants of God.  17 Honor everyone. Love the brotherhood. Fear God. Honor the emperor. (1 Peter 2:10-17, ESV).

Peter’s instruction was also in keeping with Paul’s doctrinally rich letter to the same Christians a few years earlier.  For some perspective, consider that Paul was ultimately martyred just outside of Rome under Nero’s reign.  He explained:

1 Let every person be subject to the governing authorities. For there is no authority except from God, and those that exist have been instituted by God.  2 Therefore whoever resists the authorities resists what God has appointed, and those who resist will incur judgment.  3 For rulers are not a terror to good conduct, but to bad. Would you have no fear of the one who is in authority? Then do what is good, and you will receive his approval, 4 for he is God's servant for your good. But if you do wrong, be afraid, for he does not bear the sword in vain. For he is the servant of God, an avenger who carries out God's wrath on the wrongdoer.  5 Therefore one must be in subjection, not only to avoid God's wrath but also for the sake of conscience.  6 For because of this you also pay taxes, for the authorities are ministers of God, attending to this very thing.  7 Pay to all what is owed to them: taxes to whom taxes are owed, revenue to whom revenue is owed, respect to whom respect is owed, honor to whom honor is owed. (Romans 13:1-7. ESV).

When we honestly consider the government persecution and corresponding danger (to the point of death) that Jesus and early Christians were experiencing, coupled with the contemporaneous instruction of Jesus, Peter, and Paul, the premise behind the social media post – Christians are not bound to submit to evil government – seems pretty absurd.  What are we to make then, of various governmental entities categorizing churches as “non-essential” these days?  From a spiritual perspective, not much.  The designation is not a directive to prohibit Christians from exercising their faith, reading their Bibles, praying, worshipping corporately via alternative means, evangelizing, and the like.  Rather it is a TEMPORARY governmental designation in the midst of a public health crisis intended to limit the spread of a deadly illness among church attendees as they congregate.  Do we necessarily like the way the label sounds?  No.  Do we necessarily agree with other designations as “essential?”  No.  But is this the equivalent of the Sanhedrin putting Peter in jail for sharing the Gospel?  No.

It is a tough lesson for American Christians.  We love our rights to worship and assemble and express our opinions about our government institutions and leaders.  For some of us, those institutions have enslaved, imprisoned, discriminated, and even committed acts of genocide against us.  There is something very tempting about laying blame for our unjust treatment or the ills of society at the feet of an unjust or immoral government and rationalizing that we are justified to resist its rule.

But Scripture is clear:  “render to Caesar what is Caesar’s,” be subject to government institutions “for the Lord’s sake,” for God has instituted government institutions and “whoever resists them resists what God has appointed.”  (Note that there is nothing wrong, per se, with exercising our rights, like Paul did, for instance, when he initiated his right as a Roman citizen to appeal his imprisonment in Acts 25.)  Though our flesh may resist these words, particularly in the face of injustice, the Scripture resonates with our renewed spirit as we consider the circumstances facing our Lord and His Apostles when they gave these instructions.  The key is to remember that, to fulfill His perfect will, God has instituted the governments that reside over us – sometimes for blessing and sometimes for judgment.  He is the Potter, we are the clay, and He orders our steps.  He has made clear that it is His will that we honor and pray for the government institutions and leaders He has raised up.  It is not about us, or even about the government; it is about our God and what He desires of us.