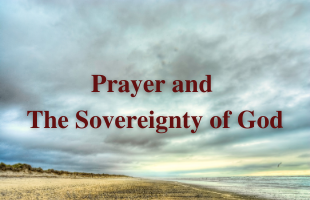 It is an abiding comfort to Christians to know that God is running the universe. As C.H. Spurgeon wrote, “God’s Sovereignty is the pillow upon which the believer rests his head at night.”

No matter the circumstances we face, or what we see in the world, we are assured from Scripture that God is in charge (Psalms 115:3; 135:6). Believers routinely affirm this truth by asserting “God is still on the throne.” That assurance is the foundation upon which we may bend our knees in prayer. For if He is not Ruler of all, prayer is but a pious wish. We know, however, that because our God rules every inch of the material and immaterial realms of existence, our prayers, which are consistent with His will and nature, will effect change.

The change caused by our prayers is not to change God’s mind or purposes. For His purpose is eternally established (Ephesians 3:11). But our prayers are a part of bringing divine plans to fruition.

Christians are commanded in Scripture to pray, even be devoted to prayer (Colossians 4:2). Prayer by followers of Christ is never viewed in the Bible as unnecessary because of the Sovereignty of God. The Sovereignty of God grants to us assurance that our petitions, supplications, and intercessions can be answered. A God who is not sovereign is not worthy of the name. In fact, to be sovereign is to be God.

The Westminster Confession of Faith states, in part, that God “ordains whatsoever comes to pass.” This is not a statement dreamed up by theologians but reflects biblical teaching (Ephesians 1:11). How does one relate this ordination or decree of all that happens in human history to prayer?

God uses means to accomplish His ends. Whatever He has decreed or planned to happen in the universe, He has also ordained the means by which it will be done. The prayers of the saints are an ordained means by which God achieves His ends in our life, our church, and in human history. Needless to say, we do not know what God has ordained. We are not privy to the pretemporal counsel of the Trinity. Such things cannot be made known to us, apart from divine disclosure. The secret things belong to the Lord (Deuteronomy 29:29).

Richard Phillips gives an additional way in which we can know what God has ordained. He writes, “We do not know what God ordains until it happens.” So then, pray and watch to see what happens.

During biblical days, believers did not allow the sovereignty of God to inhibit their commitment to prayer. Isaac, the son of Abraham, the inheritor of the Abrahamic covenant, which features the divinely given promise of an innumerable number of descendants, faced a problem. He and his wife, Rebekah, remained childless after two decades of marriage. Did Isaac throw up his hands in resignation and mutter, “God is sovereign?” No, not on your life! The man prayed and because Yahweh is sovereign, He opened Rebekah’s womb (Genesis 25:25).

The apostle Paul wrote a closely reasoned exposition of the sovereignty of God in Romans 9:1-23, but he also expressed his own yearning to be cut off from Christ for the salvation of his “kinsmen according to the flesh” (Romans 9:3) and prayed to God for their salvation (Romans 10:1). Not only was that his personal desire and prayer, but by the superintendencies of the Holy Spirit, Paul enjoined the believers in Ephesus to pray for the lost (1 Timothy 2:1-4).

Our responsibility before God is to offer up prayers and intercessions indiscriminately for the unregenerate. Again, God has ordained prayer as a means to accomplish His divine objectives. It is a vital part of His sovereign operations.

We should stand in awe that the Sovereign One, who needs nothing from us (Acts 17:25), who does not need our participation in what He does (remember Creation Week), would sovereignly choose to include our prayers as instruments for His purposes on earth. What an impetus for us to eagerly approach Him in prayer.

One did not approach an ancient king unless permitted to do so. To come near a king, the royal scepter had to be extended. King Ahasuerus extended the golden scepter to Esther, showing she had obtained favor in his sight (Esther 5:2). Our heavenly Father, the King of kings, has extended the scepter to us. We have obtained His favor by His grace in Christ. Let us, then, enter the throne room of the King and make our petitions known.

What Was God Doing?

Race: A Biblical and Theological Perspective
//