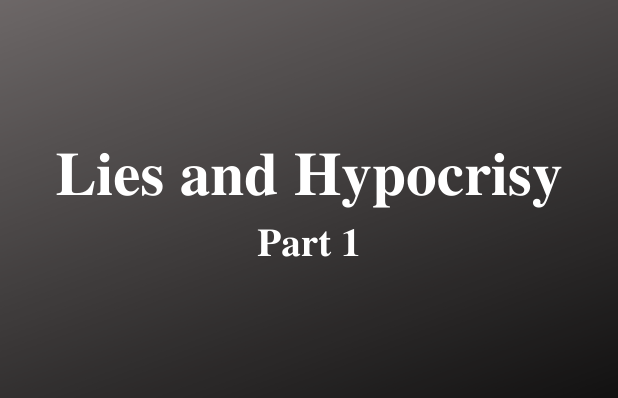 As toddlers, not long after the moment we are able to begin to process language, we will be exposed to and engage in lying.  New parents are shocked the first time their precious angel attempts to convince mommy and daddy that he or she did not do the thing their parent just caught them doing.  We come out that way – little liars: “The wicked are estranged from the womb; they go astray from birth, speaking lies” (Psalm 58:3, ESV).

We all inherently know that our dishonesty is not good behavior.  No one appreciates being lied to or lied about.  In fact, there is nothing a prolific liar hates more than for someone to lie to them – ironic, isn’t it?  And hypocrisy is never far behind.  When we ask someone what they call a person who lies about them, they will declare with great indignation, “a liar!”  And yet, when confronted for lying, the same person will say, “I’m only human.”

Exhibit A in society’s downward spiral is the explosive growth and acceptance of lying in virtually every venue.  Again, if any of us claims not to have lied, we prove the very point, right?  But the shame and embarrassment of being caught in a lie, and the negative consequences associated with being labeled a liar (like being ostracized), are less and less present.

Today, people openly attack verifiable facts as false, creating widespread cynicism and doubt about the truth of virtually everything – even things others have seen with their own eyes and heard with their own ears.  As a result, we are left with “my truth” and “your truth,” and people choosing sides based on their own preferences and feelings, rather than the facts.  And, having chosen the side they desire to support, people will ridicule, name call, and fight strangers, friends, and family to protect their side’s story.

God is Truth and Commands Truthfulness

Satan is the Father of Lies

In contrast to Almighty God, Scripture tells us Satan “… does not stand in the truth, because there is no truth in him. When he lies, he speaks out of his own character, for he is a liar and the father of lies (John 8:44, ESV).  Remember when he lied to Eve about the consequences for eating from the tree in the garden, saying, “you will not surely die” (Genesis 3:4, ESV).  Or when he filled Ananias’ heart to lie to the Holy Spirit and hold back for himself money from a land sale (Acts 5:3).  Not only is Satan the “father of lies,” but those who have not accepted Jesus as their Lord and Savior are children of the devil, who follow his evil desires, for we all are born with a sin nature (Id.; Romans 5:12).

The Word of God describes extensively the character of those who tell the truth and those who lie.  Scripture is also replete with verses describing the blessings associated with truthfulness and honesty, and the troubles that come with lies and fraud.  To begin with, God’s position on lying and truth telling is clear: “Lying lips are an abomination to the LORD, but those who act faithfully are his delight” (Proverbs 12:22; see Proverbs 6:17-19 ESV).  So is His description of the liar and the truth teller: “the righteous hates falsehood, but the wicked brings shame and disgrace” (Proverbs 13:5, ESV).  Plainly put, “a faithful witness does not lie, but a false witness breathes out lies” (Proverbs 14:5, ESV).

Liars wreak havoc.  While a truthful witness saves lives by supporting justice, “the one who breathes out lies is deceitful” (Proverbs 14:25, ESV).  In fact, a lying tongue hates its victims, and a flattering mouth works ruin (Proverbs 26:28, ESV).  Liars are in the business of defrauding people and, as a result, are “an abomination to the Lord” (Proverbs 11:1, ESV).  Through their deceit, liars will threaten and damage a person’s reputation, economic well-being, and liberty the way a weapon wounds someone physically: “A man who bears false witness against his neighbor is like a war club, or a sword, or a sharp arrow (Proverbs 25:18, ESV).

Those who enable or join in lies and deceit are equally guilty.  Hence, spreading a false report or conspiring with someone to be a “malicious witness” is forbidden (Exodus 23:1).  And entertaining the lies of another and giving ear to their “mischievous” tongue is evil (Proverbs 17:4).

God’s judgment against unrepentant dishonesty is severe.  Liars will not escape punishment – they will perish (Proverbs 19:5, 9).  David declares, “You destroy those who speak lies; the LORD abhors the bloodthirsty and deceitful man” (Psalm 5:6, ESV).   So, while truthful lips are said to endure, a lying tongue is fleeting (Proverbs 12:19).  And the “getting of treasures by a lying tongue” is considered “a snare of death” (Proverbs 21:6, ESV).  Certainly, no one desires to be poor, but liars are so detestable, Scripture says it is more favorable to be poor, than to be a liar (Proverbs 19:22).  When we consider the ultimate fate of the liar, we better appreciate the point:

But as for the cowardly, the faithless, the detestable, as for murderers, the sexually immoral, sorcerers, idolaters, and all liars, their portion will be in the lake that burns with fire and sulfur, which is the second death" (Revelation 21:8, ESV).

Recalibrating our Truth Compass and Recommitting to Honesty

In the ever-increasing world of blatant lies and deceit, it is easy to wear down, to have our senses dulled, and to lose the sensitivity God desires that we maintain regarding truth and honesty.  Again, we should expect the unsaved to act that way.  But as Christians, we must constantly train and battle against the things that would weaken our spiritual compasses and threaten our testimonies.

Paul reminds us that we may have behaved as sinners before, engaging in dishonesty, but we should not lie to one another because we have “put off the old self with its practices” (Colossians 3:9).  Having put away “falsehood,” we are to speak truth to one another (Ephesians 4:25).  Likewise, Peter says: “put away all malice and all deceit and hypocrisy and envy and all slander” (1 Peter 2:1, ESV).  So, in a world where people lie about lies and lying, it is important to renew our minds regarding God’s view of such conduct and recommit ourselves to letting our “yes” be yes, and our “no” be no (Matthew 5:37).

In Part 2 of Lies and Hypocrisy, we will take a closer look at one of the most destructive sins of dishonesty today that harms our witness for Christ and Christianity – hypocrisy.